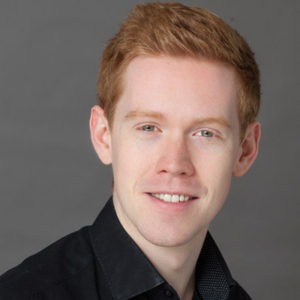 James is a baritone lay clerk at Christ Church Cathedral and recent graduate of the University of Cambridge where he was a Choral Scholar at King’s College. With the choir at King’s James featured as a soloist on the live Christmas Eve Radio Broadcast, the Carols and Easter television programs, and in major concert halls across the UK and abroad. James has also performed as a soloist with various ensembles, including with The Yorkshire Philharmonic Choir in Fauré’s Requiem and Rutter’s Mass of the Children, and has given many solo recitals, including two performances of Schumann’s Dichterliebe. Last year, he was awarded Second Prize in the 2017 Clare College Song Competition. James learns with Russell Smythe.