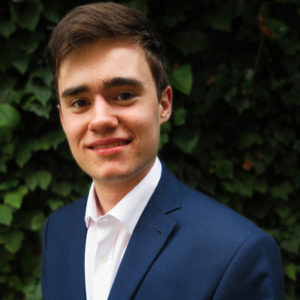 Having trained under Bronwen Mills and Professor Edward Higginbottom for 5 years as a treble in New College Choir, Oxford, Joseph continues to study with Bronwen, whilst being an active member of a number of vocal groups and choirs across Oxford. Now a tenor choral scholar with the Oxford Bach Soloists, Joseph has also been singing at the church of St Michael at the Northgate since 2015, and was appointed as a choral clerk in 2017. He is also a member of the Rodolfus choir, working with Ralph Allwood MBE. When not singing or studying for his A Levels at Magdalen College School, Joseph enjoys composing and arranging music and is a keen supporter of Reading Football Club.